THE TIP OF THE ICEBERG

I remember the first time I heard about the yamas and niyamas. They were essentially described to me as the 'dos and don'ts of yoga'. 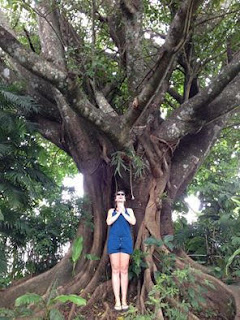 "Uh-huh, yeah I got this," I thought to myself as I listened to how we're supposed to be kind and honest and all that good stuff. Of COURSE I'm not supposed to steal. Sure, lying is bad. Yeah, being clean makes good, common sense. I listened. Nodded appreciatively. Gave myself a mental pat on the back for already being AMAZING at the yamas and niyamas and then went along my merry way.

Yes, from time to time I would create a theme for a class based around one of these 'rules' but other than that I didn't think of them too often. It wasn't until I was asked a couple of years ago to check in at the end of every day with how I did with the yamas and niyamas. It was then that I began to understand them more.

I'm not quite sure if it was because of this check-in or because I'd started to find more maturity in my practice (and let's face it, in my life) but as I continued to check in, as I continued to delve deeper into the world of the first limb of yoga, I started to realize "whoa guys, the yamas and niyamas are actually MIND-BLOWING." I believe I actually uttered those words the last time I lead a workshop on them. AND PEOPLE AGREED. Yes, the yamas and niyamas are actually mind-blowing and can bring a whole new layer to our yoga practice.

It's funny that of the eight limbs of Patanjali's yoga the Yamas and Niyamas are listed first and yet they are the ones that are glazed over so quickly. These guidelines are not only there for when we're on our mat practicing. When we bring them into our day to day lives they can actually bring a lot of clarity to what is holding us back. The yamas and niyamas shed light on where we may be coasting or resisting or falling into bad habits. The yamas and niyamas can teach us how to better communicate and connect with the people around us. Basically the yamas and niyamas can teach us how to be better people. I don't want to be too dramatic here, but I actually believe they can help us move from simply existing to actually LIVING.

So no, I'm not going to list them out for you here. You're going to have to come out to my speakeasy at Prairie Love Festival for that. Sometimes you just gotta learn things in person from someone who is super jazzed about what she's talking about. This is just the tip of the iceberg baby! Be prepared to go deep!
Labels: Clancy Sullivan Niyamas PRAIRIE LOVE FESTIVAL Tip of the Iceberg yoga festival yoga festival canada Yoga Sutras Yoga Yamas