What does Stanley Cup winning goalie Tim Thomas credit his success to, and the Great One Wayne Gretzky do regularly throughout his illustrious career? Yoga.

Based on the success of superstar yogis like Thomas and Gretzky, yoga is clearly beneficial for hockey players... but why? According to Darlene Sveinson, yoga instructor and health and wellness coordinator for the Balmoral Blazers hockey team, there are five key physical skills that hockey players need, which yoga provides: speed, agility, strength, quickness, and power.

Off-ice training for hockey players usually consists of calisthenics, heavy leg presses or running the ladder. However, here are some alternative yoga moves that can help develop speed, agility, strength, quickness, and power as well.

A player can be wonderfully skilled, but if they cannot make it to the puck in time, they never have the chance to use their skills. The length of a player’s stride is the foundation of their speed. The emphasis on stretching the legs and specifically the hamstrings in yoga can give a hockey player that quick step needed for racing to the puck. 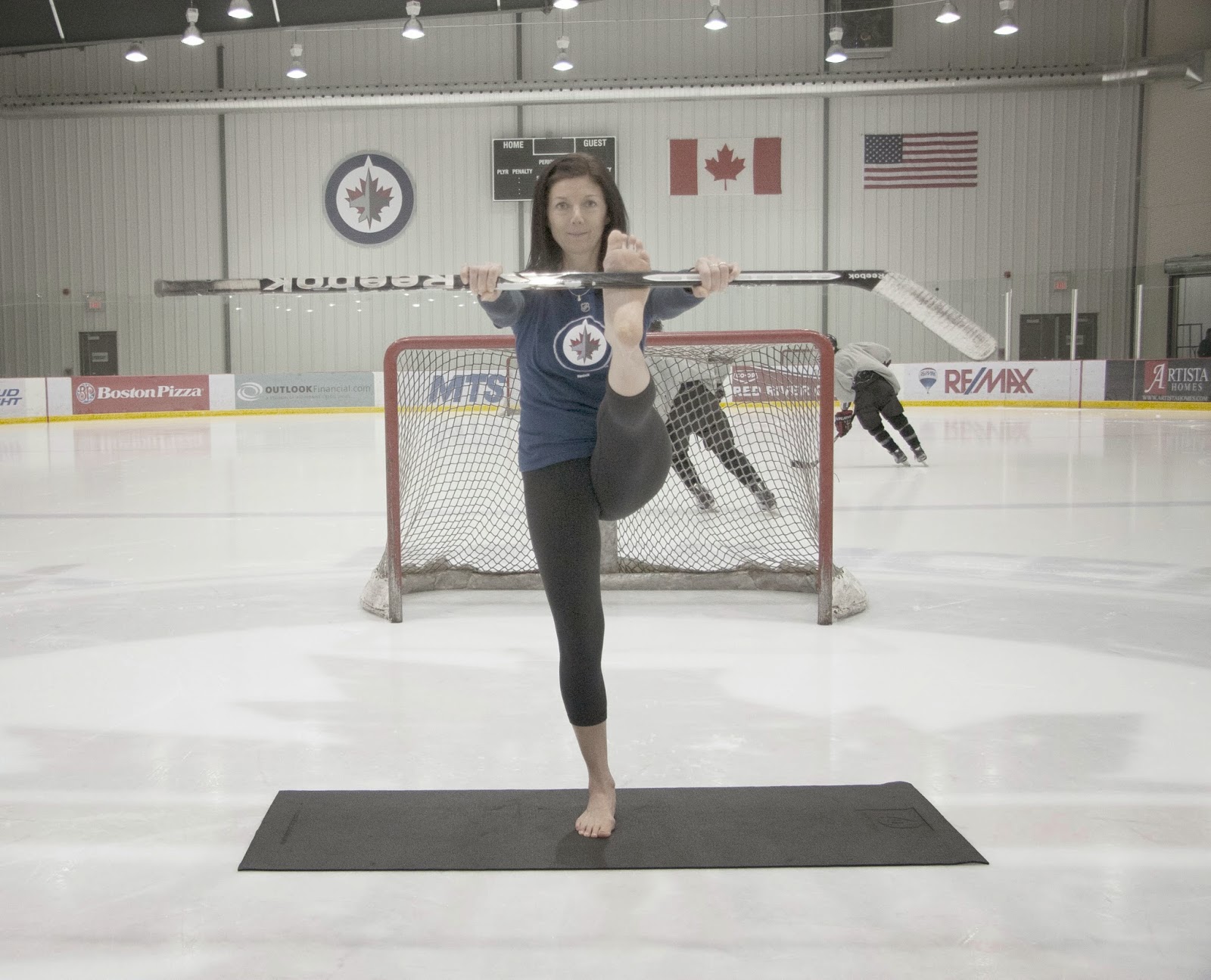 To increase speed try Supta Padangusthasana or Reclining Big Toe pose. To try the pose lie on your back and hold your leg straight up in the air with the aid of a belt. You can also work on your balance by doing this pose standing up with your leg straight out in front of you.

Strength is so advantageous in hockey especially when battling in the corners or clearing people from the front of the net. Yoga develops strength by training muscles and joints to be stable when holding a posture.

Plank pose if perfect for building strength. You can move into the pose from downward facing dog. Draw the torso forward until the shoulders are over the wrists and the back is flat in a straight line, as if doing do a pushup.

Awkwardness in skating or moving will slow a player down. In yoga, one is often reminded to stay in the present moment and concentrate on the breath. This concentration trains the body to be coordinated and agile. 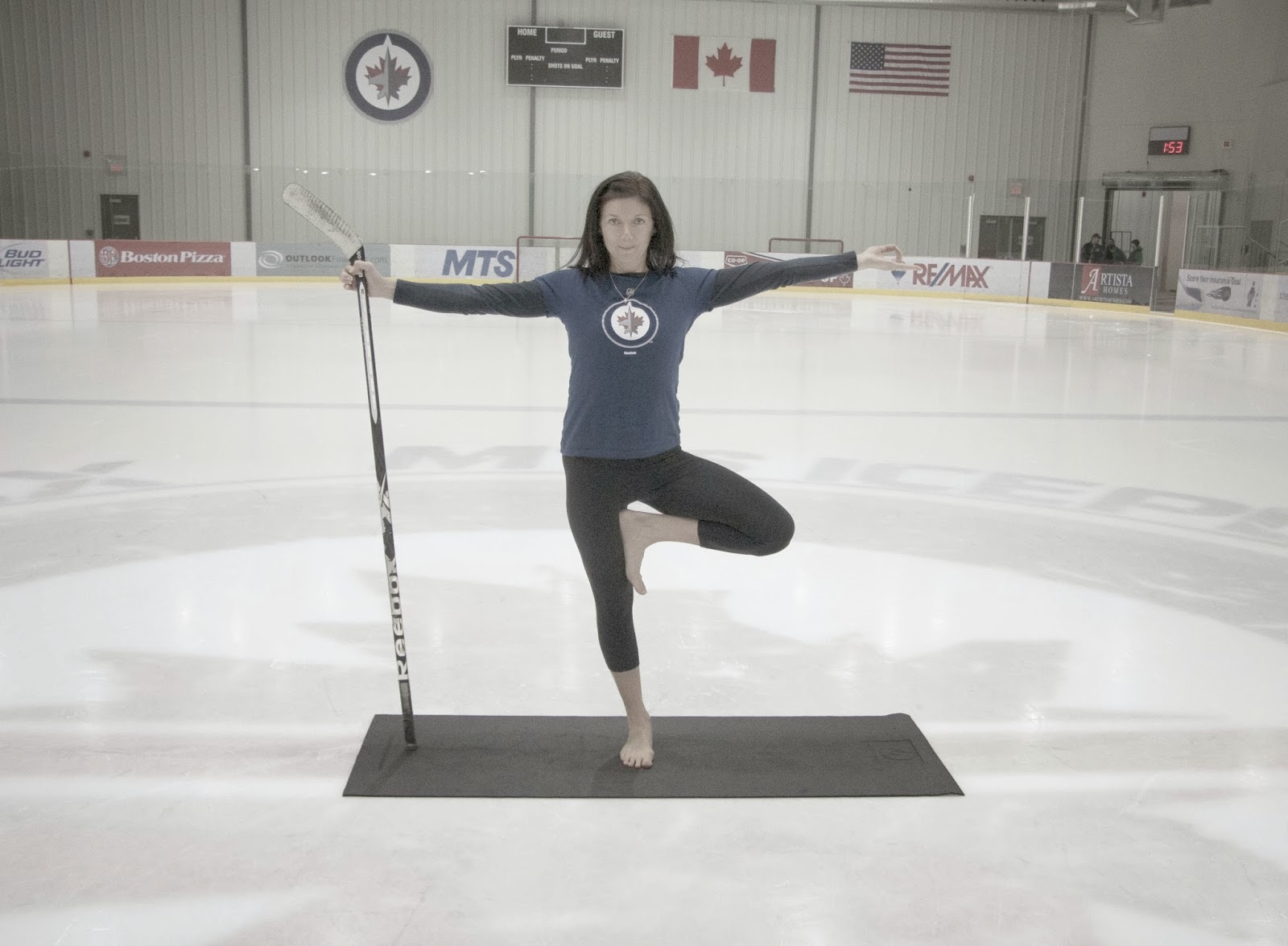 To increase agility try tree pose where you stand on one leg and bring the bottom of your foot to rest against either the side of your calf or inner thigh. When you are balanced bring your hands together into prayer. Make sure to switch legs to keep the body balanced and to not rest the foot on the side of the knee, which will put too much pressure on the joint.

“Power is a combination strength and quickness,” said Sveinson. To increase power try Pigeon pose. This pose stretches the hockey tush that players are famous for. A ton of strain is put on the gluteus in hockey as it powers every stride players take. This position also opens the hips, which can be very beneficial for hockey players as hips can become very tight and immobile on a hockey player because they are used with every stride.

Although most players posses a great amount of power, players should remember not to muscle through postures. This can be tough for hockey players because of their strength and hardworking nature. Have strength and determinations while practicing, but remember to “make is peaceful,” said Sveinson. Good check-in points are the face, mouth, or tongue. If these areas are tight, remember to relax them to get the most out of the practice.

Sveinson also warns against any pose that strains the groin area. Groin injuries are very common for hockey players. Try to keep a healthy balance of keeping the inner thigh healthy and flexible and overusing the muscles. “Stretching should work, not hurt,” said Sveinson.

Quickness is a key factor in gaining possession of the puck. “Quickness is a combination of speed and agility,” said Sveinson. Any pose that works on a player’s agility will help their quickness, such as triangle pose. 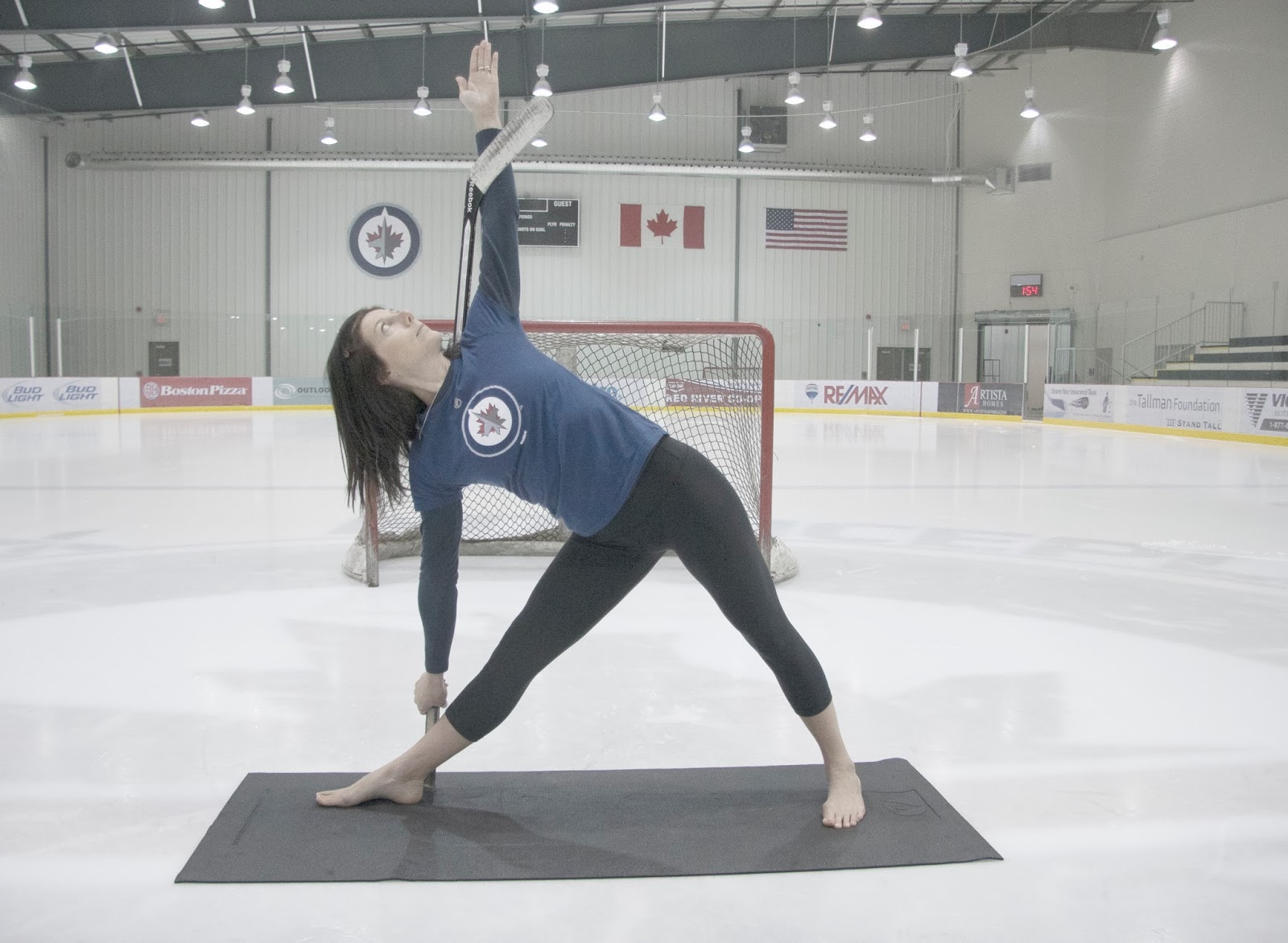 Yoga can also simulate some awkward or asymmetrical positions, which a player might find them self in a game. Yoga teaches one how to find balance in that posture and that balance can translate to the ice.

-------
Not only does yoga help with the physical needs of a hockey player, but the mental requirements as well. Yoga gives athletes the time to find that quiet space. Yoga helps improve focus and concentration and provides an “overall feeling is wellness,” said Sveinson.

Glenn Ing, certified yoga instructor and lifelong hockey player, including time in the Western Hockey League with the Regina Pats, thinks yoga can balance the repetitive motions in hockey. Players usually lean forward for entire games and practices. Back bends and poses like the cobra and camel can balance even out the constant leaning forward in hockey.

Yoga also helps with lung capacity because of the concentration on breathing said Ing. Injuries run rampant in every age and level of hockey. The flexibility yoga provides prevents injuries and can help those recovering from injuries. “The more flexible one is, the less the chance of injury,” said Ing. Yoga also flushes our toxins in the body such as lactic acid reducing stiffness and increases blood flow to muscles, speeding up healing.

Whether you’re a professional hockey player or play beer league for fun consider laying down the mat. Yoga is something you can do for your body to give it a break from the pounding a body can take in hockey.

“Yoga is that special time where you don’t have to worry about anything else. You come out more energized and more alert,” said Ing.