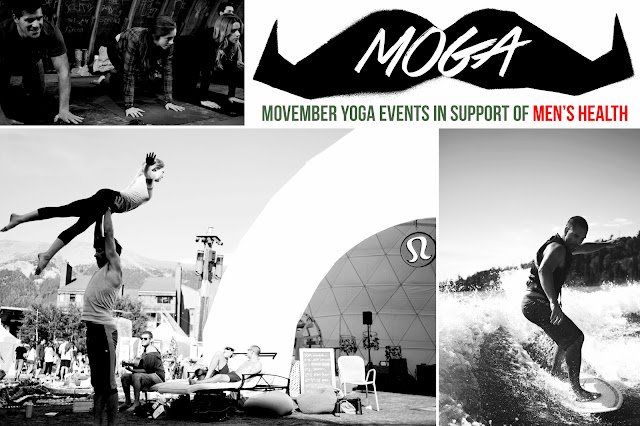 The tradition of Movember began ten years ago in the land down under with 30 Mo Bros trying to raise awareness for men's health issues in Australia. The community has since grown to a worldwide movement and the power of the mustache is changing the face of men's health with over 1.1 million registered Mo's and $146.6 million raised in 2012.

Prairie Yogi is proud to to be a part of the movement to create an even bigger year in 2013, where we raise not only money across the prairies but also awareness for how to prevent men's health issues with the Move initiative (watch the video below for more info).

We are teaming up with our friends at lululemon athletica polo park and Yoga Public to build and support our community with a series of MOGA karma yoga classes. Join us at these donation based yoga classes where all levels of yogi are welcome.

Come out to support the men in your life and bring the boys with you: your dad, your brother, and your main squeeze could all use some good stretches and deep breaths for a great cause.

On top of these four MOGA nights, 100% of the Karma donations collected from Yoga Public's karma classes this month will go to the Movember charity foundation in support of men's health in Canada.

From the Movember Canada Website:
New research is showing that sitting and inactivity are linked to increased risks of heart disease, diabetes, cancer, and depression. Our bodies are designed to move; when we sit for extended periods it causes your body to shut down at the metabolic level. When your muscles (especially certain leg muscles) aren't moving, your circulation slows, using less of your blood sugar and burning less fat.


- In 2013, more deaths will be attributed to physical inactivity (5.3 million) than smoking (5 million).*
- Men who sit more than six hours a day have an 18% increased risk of dying from diabetes compared with someone who sits for three hours or less a day
- Today's 10 year olds are the first generation to have a shorter life expectancy than their parents.*