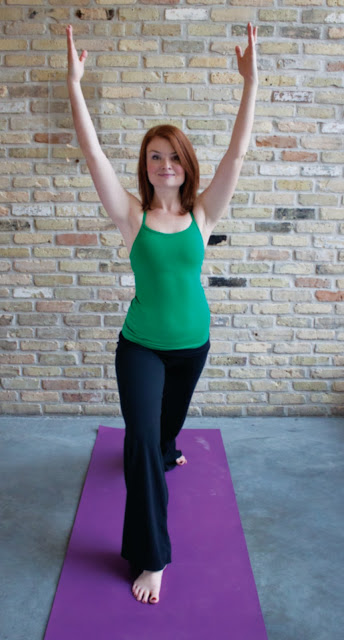 • Square hips over front leg with a strong hugging to midline
• Back leg rolls more inwardly, while extending through outer heel
• Front leg, bend deeply in hip and knee, align knee over ankle
• Lift belly, spine and ribs up through head and hands 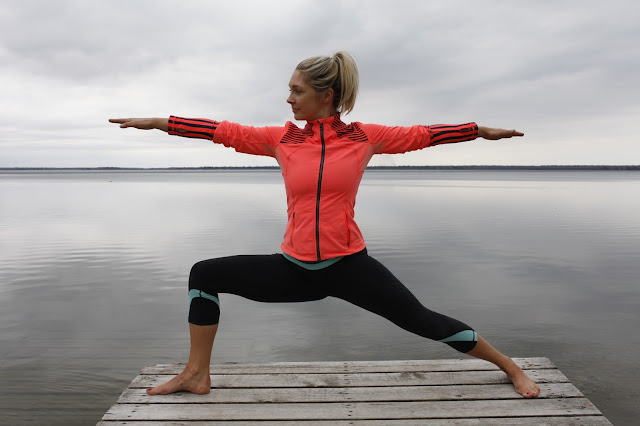 • Open and square hips to the long side of your mat, strong hugging to midline-back leg draws back and maintains a continuous sense of lift and inward rotation of the thigh bone-front leg rolls open as the tip of the tailbone tucks under, knee over ankle, in line with second toe
• Lift strongly with abdomen, extend up through head and evenly out both arms 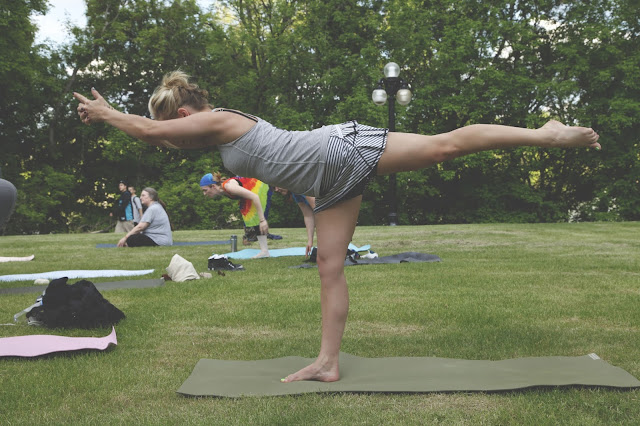 •As you step in to balance on the front leg, the back hip tends to roll open and the front knee buckles inward. -- To correct, start by taking a nice bend in the standing knee and drag the outer hip back to align knee over second toe.
•Maintain dragging the hip back as you extend the leg straight
•Keep hips square extend out through back leg while extending chest in opposite direction
•Hands can start on hips, then out to the side or over head as one can maintain square hips and a strong back and core

The hindu myth around the warrior poses is one that is more commonly known:

The short of it is; Lord Shiva creates a fierce warrior, Virabhadra, to take revenge on his wife's father, Daksha. Daksha was strongly opposed to Sita's union with Shiva and out of spite purposefully excluded them from a big family event. In anger Sita killed herself by throwing herself into the sacrificial fire. Virabhadra is said to have been manifested from a lock of Shiva's hair. The three expressions of the pose are his decisive blows which essentially kill everyone involved in the gathering and Daksha's head ends up on a pike.

It all works out in the end as Daksha is brought back to life, however now with the head of a goat. Sita is reincarnated in a new form and with patience Lord Shiva waits until he can be with her again.

It all seems rather aggressive for the Lord of Yoga and far from what many of us feel we are practicing when on the mat. Yet if you have ever held the poses for longer than a few minutes you may notice aggressive is not that far off with the welling heat and intensity that they can generate.

The story is a metaphor you could think of like this. Shiva and Sati (Shakti) are the universal pairing of consciousness and manifest. Daksha is the ignorant or concealing quality of Grace looking to corrupt its union. The fierce warrior is the dedication we bring to our practice, who upholds the integrity of the heart. The whole story is summed up with patience and humility. Shiva bound in form must still wait for Sati's reincarnation and Daksha forever living with the memory that nothing can separate this universal pairing.

When we start to interweave these philosophies and metaphors into our physical practice, it is no longer a series of poses, but instead a deep & dynamic interplay of Grace. It becomes our chance to overcome that which wishes to keep us feeling separated and embody the courage to overcome that force with a humble patience; A means in which to transform the way we see the everyday physical world into the fullness of universal consciousness.